PIANOS IN THE HOME -- A Page for Interior Designers

At Shaffer Pianos, we find it rewarding to work with interior designers who are considering an antique piano to compliment fine decor or to serve as a focal point in a newly designed room.  Very often, designers have a sense of which type of wood best works in the room as well as the preferred color.  We carry a selection of pianos from the most prestigious makers in the world including Steinway, B—sendorfer, Erard, Pleyel and Chickering.  These rare pianos have gorgeous veneers in mahogany, rosewood, or walnut.

Buying an antique piano from an antique dealer is a risky proposition. Often, antique dealers have very little knowledge concerning pianos and sometimes inadvertently sell an unrepairable antique piano to a collector. Shaffer Pianos ensures our pianos are sound before we purchase them. This provides the buyer with a much more desirable and valuable antique instrument following our thorough restoration.

In addition to the sale of antique pianos, we offer complete rebuilding, refinishing and other antique piano restoration services for your clients. When refinishing  a piece of furniture, we can match a desired color using special tints and dyes similar in function to those used on pianos one hundred years ago.  We can also finish any piano in ebony (satin or gloss) or any other color requested by the customer or designer.  Many of the fine European pianos such as B—sendorfer Bechstein, Bluthner and Erard were available in ebony during the nineteenth century and look wonderful with such a finish.

The Federal period came into existence after this nation's  independence.  Early Federal furniture witnessed the designs of Hepplewhite, Shearer, and Sheraton as the predominate furniture styles. Federal period furniture styles applied to pianos of this period as well. Colonists that could afford pianos, brought such instruments from England.  Broadwood, and Longman and Broderip were among those piano makers.

The piano on the left  is an example of a fine Federal period instrument produced in America. While it may not appear to be much different from the square grand pictured below, the major difference is the latter incorporates cast iron into the frame for stability.  The piano on the left is a lovely piece of federal furniture and if in sound condition when located and properly restored, can function as a beautiful period piano for many more years.

This style was phased out during the 1830s and replaced by the Empire style that emphasized richly figured mahogany and rosewood and pentagonal or octagonal tapered legs like the Nunns and Clark (1830) square piano featured below.  Nunns and Clark was one of the early American piano makers that used the finest materials, building expensive, high quality instruments for more than fifty years.  The piano below features scalloped ivory keytops, crotch mahogany and rosewood and a brass nameplate.  It still retains the original finish in excellent condition for its age, showing evidence that it was well cared for. Our Nunns and Clark Square Piano was shown in a Metropolitan Home feature article (January 2009) on the work of Darryl Carter (scroll to the bottom of this page).

The middle of the 19th century brought with it a revival of different furniture styles including Gothic, Rococo and Neoclassical.  These elements of style could be found on some American pianos built in that century.

The tapered, octagonal legs can be found on most American square grand pianos and many grand pianos until about 1870.  The 1863 Steinway square (below right) is an example of an American square piano prior to extreme carvings in case design that soon followed. The majority of American pianos built until 1870 were square grands. While the French, the English and Germans were producing more modestly priced uprights for homes, the Americans were making larger, heavier squares.

In the later 1800s,  square grands increased in length, from an average of 6'5" during the 1830s to 1850s to about 7' in 1870.  More notes were added, bringing them up to 85 notes, heavier wire was used, increasing the power, and the cases became more heavily carved, clearing the way for Victorian furniture to dominate the later nineteenth century in America.  During the 1880s, American pianos makers started increasing upright piano production.  It was around this time that it became more evident that the general consumer no longer desired the huge square pianos that had dominated the piano market for most f the nineteenth century.

In the 1860s and 1870s, some uprights were made in limited numbers. The Victorian upright piano shown at left  is a very early upright by Steinway & Sons, built in 1868, just a few years after Steinway began producing uprights. Few uprights pianos from the 1860s are available for sale today.

The big three American piano makers in terms of quality and prestige were Chickering (America's oldest piano maker) Steinway and Knabe.  All produced instruments of superb quality in a number of different case styles. While music racks varied little, and most possessed excellent rosewood or mahogany veneers, varieties of Victorian piano legs and case moldings drew distinctions.  For the most part, American grand pianos by 1880 are modern pianos.  They are overstrung, have a repetition action, and solid cast iron frames.  When properly restored or rebuilt, they can function as well as a modern grand piano.

American Pianos from the Beginning of the Twentieth Century

By 1900, fancy Victorian pianos, like much of the American Victorian furniture was giving way to less ornate pianos.  The legs were not heavily carved, the music racks did not display intricate fretwork.  Rosewood was now much more expensive to obtain so mahogany became the predominant veneer of choice. A higher percentage of pianos were also being finished in ebony, often rubbed down to a satin finish.  The Baldwin parlor grand piano below is an example of one of the finer pianos built shortly after the turn of the century.

A number of revivals can be seen in American furniture in the early twentieth century. An interest in Rococo style, Renaissance Revival  furniture, as well as Queen Anne and King Louis furniture, influenced piano production during the time.  Mahogany and walnut veneers (fewer in burled walnut) were used with simple-scrolled music racks.  These pianos were often smaller (baby grand pianos) and a step down from their full-sized half-ton predecessors, but nonetheless served a purpose.

French piano making around 1800 was influenced by developments in England. By the 1820s, the French were setting their own standards in piano construction, design and innovation, due in large part to the innovations of Sebastian Erard. Paris was considered a city of great pride in culture, especially musical culture.   The piano companies of Erard and Pleyel were held in very high regard in European concert halls and could only be afforded by the very wealthy. In fact, Erard boasted that their pianos were "the most expensive pianos in the world."  Beethoven owned an Erard grand which he used for a number of years. Chopin and Liszt did much to add to the respect and prestige of Erards and Pleyels during the 19th century.  The 1846 Pleyel (below right) is the same as that owned by Frederic Chopin.

French pianos were more costly to produce than American pianos for a number of reasons. Often, the fallboards contained the makers name in brass, inset into fine rosewood, mahogany or walnut veneer.  An example is the fallboard of a rosewood Erard grand piano shown below, reading, "Patent Erard London" in polished brass.  In contrast, American makers after 1840 often used decals (stickers) on their fallboards that could become damaged .

In addition to aesthetic differences such as the use of brass on the cases and larger, solid brass casters on the legs, the French continued to do all facets of piano construction by hand as late as 1900.  Some forty years earlier, the Americans were depending largely on machines to carry out much of the construction.

During the Victorian period, American pianos started to produce heavily-carved, ornate pianos. The legs were massive, the case were sometimes scalloped, and the pedal lyres exhibited ornate designs as well.  In contrast, the French found the American grand pianos to be showy, overdone, and unattractive.  French pianos, Erard and Pleyel included, continued to use a case style that changed very little since the beginning of the nineteenth century. The legs were often cylindered-like, tapered from the top down to attractive brass casters. When they did display carvings, it still followed the lines of the legs.  After 1870, the French pianos did display fret-work on their music desks similar to the American pianos, but continued to keep the amount of carved wood to a minimum on the cases.

THE VIENNESE AND GERMAN PIANOS

Vienna was in many ways the musical center of Europe during the eighteenth and nineteenth centuries and that culture had a strong relationship with piano construction. Walter, Stein, Streicher, Graf and of course B—sendorfers were the prominent piano builders of the time. Mozart, Beethoven, Schubert, Mendelssohn, and Brahms were some of the great composers and pianists associated with Viennese pianos.

Classical pianists who have played on fine Viennese pianos have claimed that they now have a greater understanding for how some of the great works of Beethoven, Brahms and others should be played.  The tone from B—sendorfers is unlike that of any American piano. It is warm, mellow and clear--free of any overtones or rumblings often associated with powerful, over-strung pianos of the 19th century. Most of Beethoven's early pianos were Viennese in make, having a light action that was used by some Viennese makers like B—sendorfer throughout the 19th century.

The Viennese, and to a lesser extent, German piano makers were more conservative than the Americans with many aspects of piano construction. They continued to produce straight-strung pianos up until late in the 19th century, nearly 40 years after Steinway decided to move to the over-strung piano we see today. It was believed by the Europeans that over-stringing (having the bass run over the top of the treble wire) creates a muffled sound. There may be some truth to that, as the fine Viennese pianos like B—sendorfer and Streicher do have a beautiful, clean tone. However, the Americans were concerned with increased power and wanted to fit the longest wire possible in a piano.

In addition to the reputation as building some of the finest pianos in the world, Vienna was also a leader in fine furniture production.   In terms of appearance, Viennese and German pianos share more features with the other European piano makers in terms of simpler, tapered octagonal legs, brass fallboard nameplates and solid brass casters. They were not impressed by the highly carved ornate pianos the Americans were producing. The Viennese pianos often featured beautiful walnut cases with vertical grain or a polished ebony finish and a light bird's eye maple on the underside of the lid.  The construction on many of the Viennese pianos and German pianos was simply superb, especially the large concert grands.

Furniture constructed in Britain during the Victorian period utilized an overlapping of several styles from different eras -- namely, the Greek, the Gothic, Chippendale, and the Rococo.  Furniture makers in London built some highly ornate pieces, including pianos that featured curved sides,  highly carved panels featuring vines and flowers, and stunning book-matched burled walnut veneer.  This circa 1850 cottage piano also features and Chippendale-style legs with highly carved knees and clawed feet. 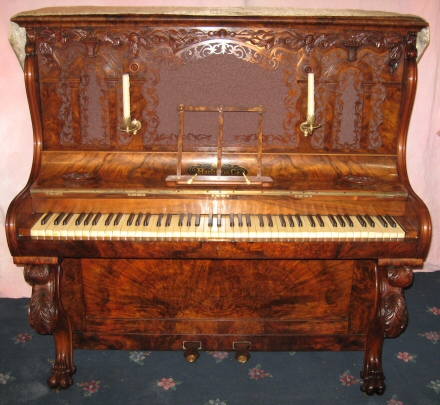